In this blog post, I will define the sweep operator, provide an application of the sweep data to simulated data, and provide some references for further study. Examples will be provided in R through the ISR3 package (Lisic, 2016).

The basic SWP operator is parameterized by a matrix and a set of indices associated with rows and columns of the matrix being swept. E.g. to sweep the matrix by the index, such that , the operator has the form . The operator may also be written more descriptively by listing the elements of as . The application of the SWP operator to the row and column of produces a new matrix with elements

As an example, consider the application of the SWP operator to the first row and column of the covariance matrix for the random variables ,

Lets try this with some real data. I have used the SWP function included with the ISR3 package.

We can compare this output with the results from the simple linear models and : Here we see that the coefficients from lm match up to our swept results. Likewise, the diagonal terms for the second and third column are equivalent to the sum of squares or the residuals. The remaining unmatched term is just the negative inverse of the covariance matrix of unscaled by .

A subsequent sweep on the second rows and columns produces the matrix,

where , is now the inverse covariance matrix of and and is the matrix Again, we can quickly check the results by comparing the output from lm to our SWP operator.

A final sweep by the third row and column produces , the negative inverse of the unscaled covariance matrix of . This can be quickly verified through R:

Caution should be used when reverse sweeping, as in application is not necessarily equal to due to floating point error. In particular when the matrix is ill-conditioned there may be considerable departure between the calculated identity and the original matrix.

A few good references on the subject beyond (Dempster, 1969) can be found in (Goodknight, 1979) and (Little and Rubin, 2014). There are a few slight differences between these implementations, but all generally do the same thing.

One function that doesn't do the same thing is the sweep function in R. This function can be used to write a SWP implementation, but doesn't sweep by itself.

Code examples can be found in the ISR3 package on CRAN and in lots of other packages. Examples in C can be found in ISR3 and as an internal function in the MNP package (Imai and Van Dyk, 2013).

Enjoy your sweeping, next time I'll go over sweeping with the generalized inverse! 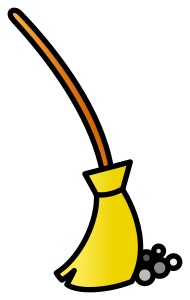